The month of Ramadhan is back and OCBC Al-Amin Bank Berhad (OCBC Al-Amin) staff, led by its Chief Executive Officer Tuan Syed Abdull Aziz Syed Kechik, took to the streets around Masjid Jamek yet again to spread goodwill through the act of sharing.

Like in the previous thirteen years since the inception of the company in 2008, the staff marked the beginning of Ramadhan with the symbolic gesture of offering bubur lambuk to their neighbours. This has remained a much-loved and eagerly-anticipated tradition since the Bank began operations and continues to be an annual highlight that is symbolic of its ongoing quest to serve everyone in the community.

People from all walks of life in surrounding areas of the Bank’s headquarters at Wisma Lee Rubber, Jalan Melaka, enjoyed the Ramadhan goodies and shared in the spirit of the fasting month. 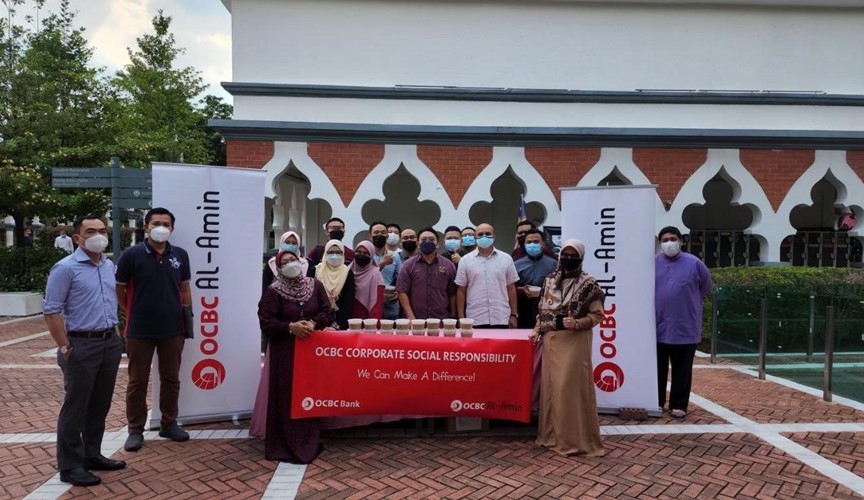 “Ramadhan is a fitting reminder of the call to give alms as a symbol of the unity we share. Heading down to the streets during this time has become a tradition weaved into the fabric of our operations at OCBC Al-Amin; this is to share in solidarity and the spirit of togetherness by offering what we have to others. Although in these past two years, it was much harder to be physically close and offer a handshake, we ensured the activity went on.

“I am pleased that we were able to distribute bubur lambuk to about 600 people – double last year – from around our headquarters here near Masjid Jamek. A big thank you to our friends from Masjid Jamek who partnered with us yet again in the effort. We hope the public will have a meaningful Ramadhan this year as we look to ease out of the pandemic. We look forward to joyously embracing Hari Raya Aidilfitri in a month’s time,” Tuan Syed Abdull Aziz said.