As part of its quest to fight fraud and scams in the country, the Commercial Crimes Investigation Department (CCID) of the Royal Malaysia Police (PDRM) has linked arms with sponsor OCBC Al-Amin Bank Berhad (OCBC Al-Amin) to distribute more than 10,000 posters to schools, government offices and other suitable public places in a nationwide awareness campaign.

The campaign also involves placing the contents of the poster in popular online sites.

“In 2020, the nation recorded more than 14,000 cases of scams with an estimated loss of over RM413.6 million. The upward trend is continuing with more than 12,652 cases already recorded in the first eight months of 2021, involving losses of more than RM248.2 million.

“While we have carried out several campaigns in the past to fight the problem, the key issue that continues to hold back our progress is the lack of public awareness. If we can effectively get the public to think twice before committing to something that is clearly too good to be true, we will be able to win the battle. So, with the help of OCBC Al-Amin, we are on a drive to ensure that as many people out there as possible get to know how scammers are trying to cheat them and to be watchful of them. 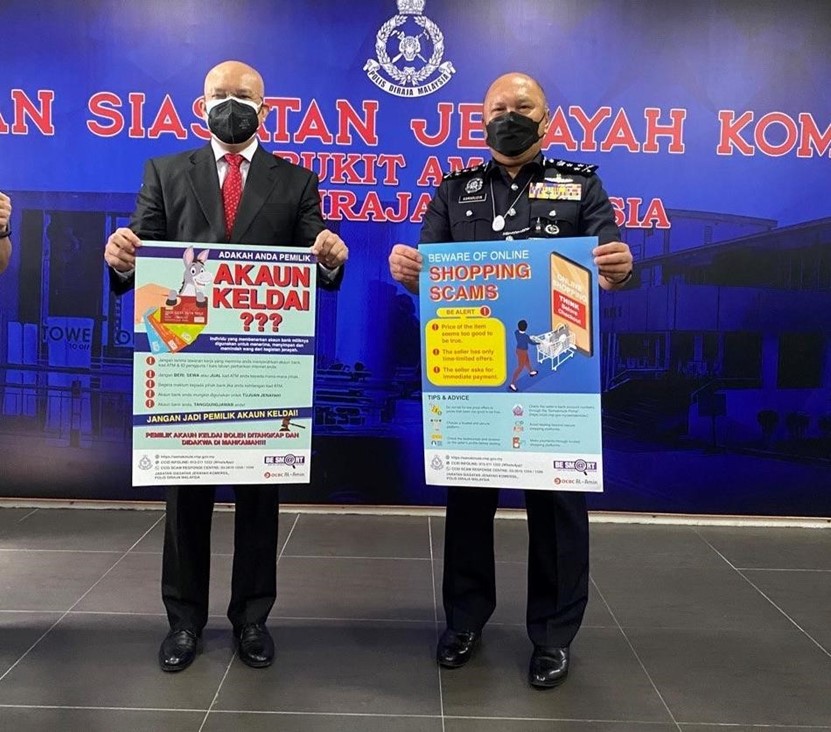 “This initiative at grassroots level – involving schools, government offices and other suitable public places – will be key to augmenting the successes we have experienced in bringing to book the perpetrators of the crimes and the other initiatives through our social media channels and educational talks by our officers. But there is still a distance to go,” he said.

Speaking on behalf of OCBC Al-Amin, CEO Tuan Syed Abdull Aziz Syed Kechik said the Bank is pleased to play a role in crippling the scam menace which has wreaked havoc in the lives of the common people.

“Scams can affect any one and it is heart-breaking to see people lose their hard-earned savings simply because they were careless and did not notice the clear warning signs in the offers being made to them. We hope the campaign will bring about the sort of awareness and alertness that cripples the crime once and for all,” he said, adding that OCBC had also engaged PDRM personnel to share with its staff pointers about how the criminals work and how to detect the crimes.

Among the messages in the posters are those related to Online Loan Scam, Internet Love Scam, Online Shopping Scam, Macau Scam and Mule Accountholder.