The Holy month of Ramadhan is back and OCBC Al-Amin Bank Berhad (OCBC Al-Amin) staff, led by its Chief Executive Officer Tuan Syed Abdull Aziz Syed Kechik, took to the streets around Masjid Jamek to spread goodwill. Like in the past eleven years since the Bank was first established in 2008, they marked 1 Ramadhan with the symbolic gesture of offering bubur lambuk to their neighbours. 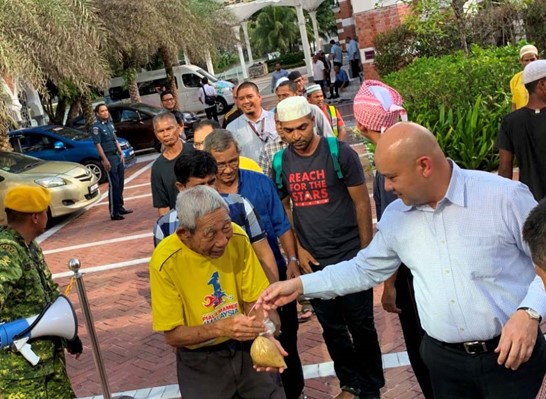 People from all walks of life in surrounding areas of the Bank’s headquarters at Wisma Lee Rubber, Jalan Melaka, enjoyed the Ramadhan goodies while they took a moment to chat and share in the spirit of the fasting month. OCBC Al-Amin Chief Executive Officer Tuan Syed Abdull Aziz Syed (centre, in light shirt and holding banner) and his staff who distributed the bubur lambuk in front of Masjid Jamek on the first day of Ramadhan.

“This is the start of Ramadhan and my colleagues and I wanted to share in the solidarity of the spirit of togetherness and almsgiving. This simple act of distributing bubur lambuk brought joy to all of us. We are thankful for the partnership with Masjid Jamek in this effort and we hope the public will have a meaningful Ramadhan this year as well,” Tuan Syed Abdull Aziz said.