Officiating at the event and witnessing the handing over of the contributions was Member of Parliament for Klang, Yang Berhormat Tuan Charles Santiago.

The donations of RM5,000 each were made through Rotary Club of Klang and Lions Club of Klang for educational development efforts in four neighbouring schools.

The development efforts will encompass upgrading of computers for SJK (C) Hin Hua, upgrading of school facilities for SMK Batu Unjur, upgrading of the school library for SJK (T) Ladang Highlands, and the purchase of benches for SK (P) Methodist, Klang.

Handing over the mock cheques at the official opening ceremony of the OCBC Al-Amin Bandar Botanic branch, OCBC Al-Amin Chief Executive Officer Syed Abdull Aziz Syed Kechik said the Bank was looking to engage with the communities in which it operates by looking beyond only providing superior banking products and services but also by meeting their social needs. 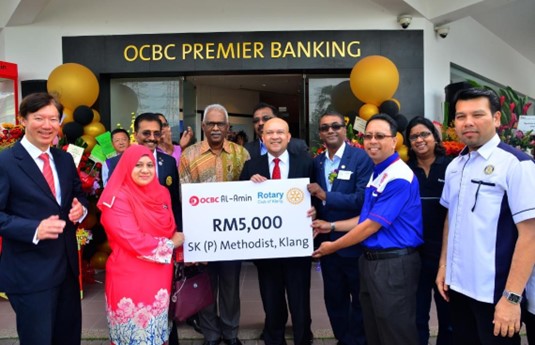 Present at the official opening event to receive the contributions were representatives of the schools.

The branch, relocated from its original Ampang Park Kuala Lumpur location (Xpres branch), is the Bank’s first Islamic banking branch in Klang, offering a comprehensive range of Islamic banking products and services.
Parent company OCBC Bank (Malaysia) Berhad has had a presence in Klang since 1940 through its conventional banking operations.

Occupying almost 9,000 square feet, OCBC Al-Amin Bandar Botanic comes complete with a Premier Banking Centre and over 1,000 safe deposit boxes, a service that the Bank believes will be welcomed by its customers.

According to Syed Abdull Aziz the opening of the Bandar Botanic branch marks a significant milestone in OCBC’s journey toward providing the community with even greater sophistication in Islamic banking.

“OCBC Al-Amin has grown steadily since our inception in December 2008. With the opening of our first branch here at Bandar Botanic in vibrant Klang, we hope to raise the bar in Islamic banking products and services for the community at large and also the affluent segment through our Premier Banking Centre.

“OCBC is, of course, a familiar name in Klang, having already been here for 78 years. The entry of our Islamic banking operations today is testament to the vast potential for banking growth in Klang. As a bank with a long history not just in Klang but the country, and consistently one of the leading foreign banks, we are both committed to and excited about the prospect of growing in this fast-developing part of our nation.

“In addition, the overall OCBC Premier Banking numbers tell us that the relationship between us and the affluent community is growing stronger and stronger due to the emphasis we continue to place on service excellence from every conceivable perspective. Our Bandar Botanic branch, which includes an almost 2,000 square-foot Premier Banking centre, is a sign that we are committed to further strengthen this,” he said.

The OCBC Al-Amin Bandar Botanic branch features, apart from the Premier Banking centre for the affluent, a business banking centre serving corporate and SME enterprises. Other services include 24-hour electronic banking services featuring ATMs and Cash/Cheque Deposit Machines. The branch is fully covered by CCTV and protected round-the-clock by security personnel, seven days a week, and equipped with a stair-lift to enable customers to easily get to the first floor.

The 3-storey OCBC Al-Amin Bandar Botanic branch is located at 117 Jalan Mahogani 5/KS7, Bandar Botanic, 41200 Klang Selangor. It is staffed by 19 people, and opens daily from 9.30am to 4.00pm, Monday through Friday.

As part of its opening day celebrations, OCBC Al-Amin is offering special promotions for those opening accounts at the Bandar Botanic branch. These include special 12-month fixed deposit rates until 17 August 2018.